Lucile “Tee Rae” Dismukes was the executive director on the Georgia Maternal and Infant Council and acted as a liaison with the Georgia Department of Public Health, Medicaid, and state government. She was instrumental implementing programs to improve the health of mothers and infants in the state of Georgia. Every year, GPA awards the “Tee Rae” Dismukes Award to a GPA member that has gone above and beyond in the mission of promoting and improving the health of mothers and infants.

Guidelines for nominations for T. Rae Dismuke Award are the following:

Past awardees have been the following: 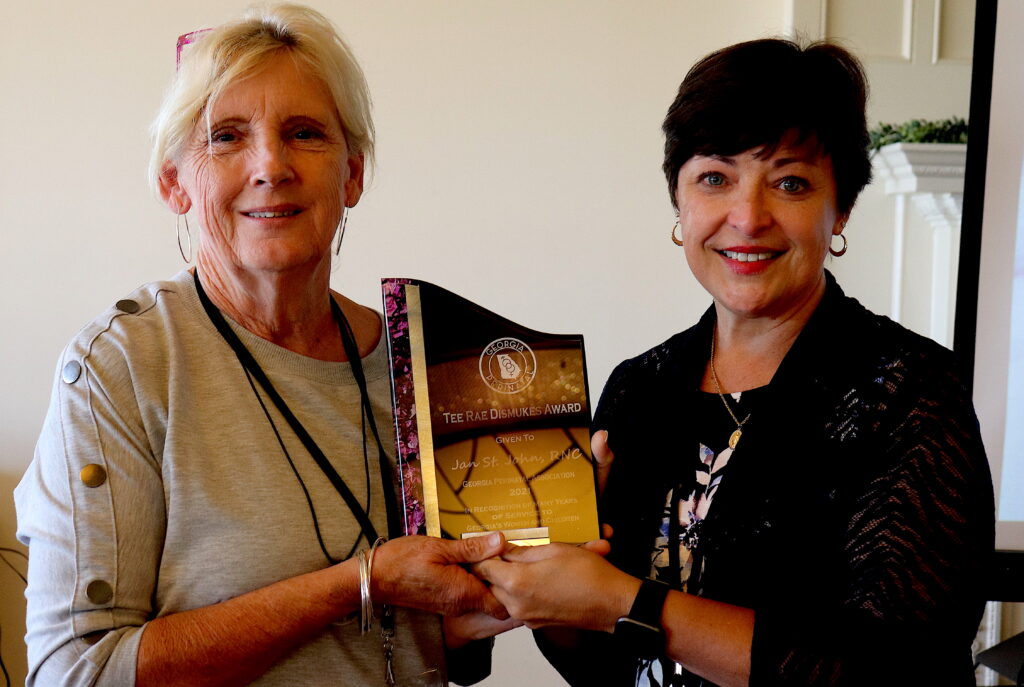 The Lucile “Tee Rae” Dismukes Award is presented each year to a GPA member who exemplifies the work, mission, and values of Georgia Perinatal Association. As we celebrate GPA’s 40th anniversary and 33rd annual conference it must be acknowledged that GPA is nothing without its members, the work you do, and the lives you touch. The 2021 recipient is Jan St. John.

About Jan St. John. Jan St.John,RNC has been in the nursing field for 32 years, and has impacted countless lives with her open heart and nurturing nature. She began her nursing career in 1989 as a nursing assistant, and furthered her nursing career in 1992 when she graduated from College of Coastal Georgia with her RN. She began to work med surg after she graduated, but soon found her passion for OB in 1995. Pursuing her passion for OB she began nursing on labor and delivery with Liberty Regional Medical Center in 1989. She continued her career at Liberty Regional Medical Center and was the director of perinatal services for almost  4 years. Then in 2019 Jan decided to retire from perinatal services and moved to St. Simmons Island where she continues to nurse prn at an assisted living/long term care facility. Jan St.John has been a member of GPA since 2003, and has served as a board member for 2 terms. In 2008 she was awarded the Hometown Hero Award by the Georgia Hospital Association. Also for multiple years she was nominated and won Best of Liberty County Nurse Award. She has inspired and mentored many nurses, and continues to be a powerful influence both professionally and personally to so many around her. She is enjoying semi retirement spending time with her family and friends, including her four daughters, and eight grandchildren. She is a selfless, caring, and loving person with a deep passion for nursing. She embodies what the Lucile “Tee Rae” Dismukes award stands for.